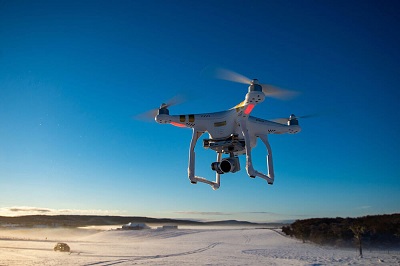 You may be looking to purchase a drone for yourself. If not, you simply need to determine whether what you saw soaring in the sky is a drone. Well, different types of drones hovering and speeding in the air have brought about the speculation of alien aircraft amongst the public. This article will put to bed most myths by clarifying the types of drones that exist.

Well, you may be familiar with only a few types, but there a wide variety of drones. I will familiarise you with types of drones available even on the market to save you time shopping for one. Classification of a drone can be by feature or function.

Single-rotor drones can go for long flights of over half an hour. They land and take-off vertically. These drones employ only a single rotor and, in some instances, a tail unit as well. Often the single rotor uses gas to power it and has large and longer rotor blades.

Gas power enables a single rotor drone to withstand long periods in the air. Featuring larger rotor blades that are like spinning wings makes them efficient drones. Even though this is a very beneficial feature, the larger blades are dangerous; they can cut and wound.

Single rotor drones are not too difficult to operate. They can drift in a single place or be in motion. Despite having lower purchase costs, they require high maintenance.

Are you looking for an efficient, easy-to-use drone that will not drain your pocket all at once? A single-rotor drone is a worthwhile investment. They even have a greater payload capacity than multi-rotor drones.

As the name suggests, a multi-rotor drone has several strategically positioned motors. This gives them better stability but at the expense of flight durations. An average multi-motor drone will need to land after only 20 to 30 minutes of flight. Electric motors power these drones.

Multi-rotor drones can only carry small packages in the air because they have a small payload capacity. They have limited thrust power that is enough to lift lightweights off the ground. Other Heavy lift multi-rotor drones can carry more weight but have much shorter flight durations.

Multi-rotor drones land and take-off vertically. They also can hover but are limited to a small flight area. These features facilitate their use in aerial photography and surveillance.

They are very affordable, with prices ranging from as little as $5000 for the simpler units. Multi-rotor drones fly fast. These useful features make them popular in the world of drones.

These are a more advanced and efficient type of drones. Unlike rotor drones that have adopted a helicopter-style, fixed-wing drones use a wing similar to an airplane. The wing gives it take off power and holds it up in the air when flying.

Since the wing gives the fixed-wing drone its power to fly, it uses gas engines for mobility. Fixed-wing drones have longer flight durations of up to 16 hours. They can map large areas, and this makes them perfect for surveillance purposes.

Fixed-wing drones are large; they need take-off strips and landing fields or parachutes. During flights, they cannot hover in a single place; instead, they go express to-from and around. They remain in motion, making it impossible to employ them for purposes that require stillness like aerial photography. However, they are perfect for monitoring functions.

As mentioned earlier, these are a more advanced type of drones. Fixed-wing drones fly higher and faster than multi-rotor drones. They can fly over 100 meters off the ground. This means that you also need better skills and more experience to operate one.

Even after use, you need the knowledge and abilities on how to convert that data captured by the fixed-wing drown into useful information. The advanced features imply that you need more money to get one off the market.

A step ahead of fixed-wing drones are fixed-wing hybrid drones. They have all the features fixed-wing drones have, but unlike their counterparts, they can hover. They also have the capability of vertical take-off and landing (VTOL) as the abbreviation in the name suggests.

Some fixed-wing hybrid drones look just like regular airplanes. They point their noses straight up and tails on the ground during take-off; they then tilt straight when flying, just like an airplane does.

Fixed-wing hybrid VTOL drones are still under development. They have not yet flooded the market. Gradually, developers will modify and improve these drones to perfection.

These drones have rotors attached to fixed wings, suggesting they attempt to integrate the features of a rotor and a fixed-wing drone. They are promising investments; however, their characteristics and flights are not yet on point because they are still under development.

You might love the idea of a drone that you do not need to control. With GPS drones, you simply feed GPS coordinates and leave it to fly on its own. It reaches the location and automatically returns to its take-off point. Yes, GPS drones are tailor-made to do just that.

They work by connecting to a satellite, then using their global positioning system to map out the route they need to take. They robotically capture required data during the flight, which can be converted to useful information by its user.

These drones are useful in mapping monuments erected in high places that are better-viewed form overhead.

This is one leisure function drones serve. Racing drones have a flight speed of up to 60 miles per hour.

Their design is in a way that they thrill hobbyists with speed but at the expense of long flight durations. They are very affordable. You can even build your racing drone!

You can even attach a camera to a drone that has enough payload to sustain it and take pictures. However, a drone designed specifically to snap photos in the air would do a more dedicated job. Photography drones have multiple rotors for better stability producing the best photographs and videos.

You can program a photography drone to fly itself over broad flight areas taking photographs or videos. Unlike using an ordinary drone for aerial photography, this drone will guarantee you good quality, high-resolution images.